And hopefully educating more people why you should too

116 racehorses have died on Australian racetracks since the 2015 Melbourne Cup. – 116

ONE HUNDRED AND SIXTEEN HORSES HAVE DIED since the 2015 Melbourne Cup. You can read about 5 of those 116 right HERE  Their names were Hazy Blur, Secret Stealth, Da Vine Warrior, Caprivi Strip and Arwoc – May you Rest In Peace 😦

7 Facts about Horse Racing that will change how you feel about the Melbourne Cup Forever – Read it HERE if you have the guts.

I could show you gruesome photos of horses dying in agony, of horses with blood pouring from their nostrils after running a race , footage of knackeries – the place where many MANY race horses are taken and disposed of like dirt on the bottom of your shoe , after their usefulness AKA money making has ended .. but I won’t – you can go to PETA, Animals Australia and numerous other places on the www to find them yourself if you have the guts

{ photos below sourced – internet via google } 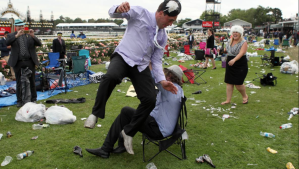 It isn’t just about the day off , the fancy clothes ( at the beginning of the day ) the all day eating and drinking or really mostly drinking its about recognising that there are live beautiful soulful animals with big hearts that want to please their masters, that want to be loved but instead of that are brutally used to make people very very rich and then discarded like trash when they are no longer of use.  Its about looking into those beautiful eyes and thinking about things for a little longer than our own selfish pleasures and thinking IS THIS REALLY WORTH THIS HORSES LIFE 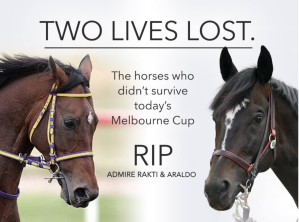