I’ve had this Pasta maker since before me moved 6months ago. I knew that I would love to have a go at making my own Pasta, something I had never attempted in my life and wouldn’t have considered doing pre Thermomix days!
I had seen  a great recipe in the Thermomix Full Steam ahead book and thought I would give that a go with a bit of my own tweaking to suit our family, well ok ME! because I don’t eat Red Meat !

I had bought the Ricotta in readiness for today. (Baby Steps ! – I’ll try making my own Ricotta in the Thermomix next time !) Today was the day ! to make Pasta I was excited ! I was revved up, fully ready for embarking on my new Pasta Making Journey and turning into a double of an Italian Mumma straight out of Rome!

I made the dough – Success – beautiful and so easy (of course) in the Thermomix. I then got out my new gadget ( of 6months !) and took it out of the box ( I had washed and dried it all previously) Set it on my bench on my non slip Ikea Pastry mat , whilst I read the instruction which said “Turn the dial to 9 the widest size” What ? what 9 ?  it only goes up to 7.. I think maybe its a typo and read on but it says in the next step to turn dial down to next setting 8 and then 7 etc so No it wasn’t a typo !.
I decide never mind 7 must be the widest and I will work with that.
Well Needless to say a lot of choice words were said and although after a lot of persistence and improvising I churned out some great Ravioli Pasta Dough Sheets this Machine’s next stop is the BIN!

The handle that you use to turn the dough out falls out ALL the time , the dial that only goes up to 7 comes out and doesn’t hold the size you put it on . The Machine moves and slips , and the clamp that came with it is hopeless – about as useful as the book that was written incorrectly ! (now I know why it was reduced so much ! quite a well known brand but clearly not well made)

I persevered and somehow managed to churn out these strips of pasta dough. However my elation at making my own pasta was slightly sullied !

I thoroughly enjoyed making the pasta despite the machine and I shall be on the look out for a new Pasta making machine ! I shall be working on the perfection of the Ravioli Shapes next time as well

Here is the Ravioli that I made. I used the recipe from the Full Steam Ahead book for the Pasta Dough and then for the filling I used
400g Ricotta
1-2 tsp Lemon Zest
1 Egg
Pink Sea Salt and Black Cracked Pepper
Baby Spinach Leaves.

I added all the ingredients except the baby spinach leaves and mixed on speed 5 for 3 seconds with the butterfly in. I topped it out into a bowl and then blitzed some baby spinach and added it through the ricotta. I placed the bowl in the fridge whilst I got the dough ready.

I then prepared the Pasta dough and placed the Ricotta/Spinach Mix down the middle and proceeded to make the Ravioli.
Its such a simple and easy recipe to make

I cooked the Ravioli today in a Pot of Boiling water as I was busy doing other things and this was a trial run of making the pasta first.

Easy ! After I get a new Pasta Machine 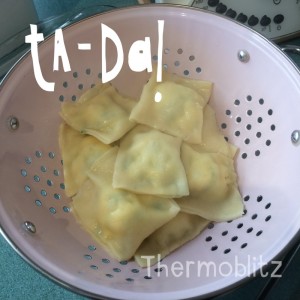