Its got to stop. This public shaming needs to end. There is no doubt that the woman ( Belle)  is a liar and has done the wrong thing AND I personally  have lost a great deal of people to cancer so I don’t need to hear how I wouldn’t understand because I’ve never been affected because I have ( including my Mum )
60 Minutes really didn’t need to do that interview except for ratings. It was cringeworthy watching. Not just because Belle was very strange in her answers and couldn’t really answer straight But because of the way Tara questioned her.

I ended up feeling slightly sorry for Belle. Its been all over the morning shows and numerous online papers and sites today.
All Hating on her. Shaming her.
The majority of us do not even know her and were not directly affected by her. Even if people bought her book or app from what I am told there were excellent recipes on there. So people still got something for their $ – The only people that are affected directly by this are those people ( their family and friends ) who had cancer and listened to her BS.
Other than that it doesn’t affect the rest of us not to the degree that people are responding to it.
The hateful hateful words that people are throwing around saying they wish she would get cancer and die , REALLY ?
The hateful hateful words saying they wish her child was taken away from her REALLY ?

I am sure I will get the obligatory “well why you are continuing it by writing this post ” …. etc
I’m not writing it to “shame” Belle I’m commenting on a 60 minutes tv segment that I thought really shouldn’t have happened, Its been reported “widely” that she was paid $45K for that interview but yet it has been stated elsewhere that she was not paid.
If she was paid frankly shame on 60 Minutes for exploiting the situation and of a possibly mentally unwell, definitely unbalanced young woman. Whether she is 23 or 26 its still a young woman. That whole line of questioning re her age was really difficult to watch.

There is no doubt at all that Belle Gibson did the wrong thing and continued to do the wrong thing but the continual vitriol and shaming that is going on publicly and worse by the media in my opinion is deplorable.

The word seems so full of people so angry and unhappy in their own lives that when someone does something wrong they unleash all their anger on that person.
Or perhaps people enjoy posting nastiness online and attacking people so that they continue to be engaged in anger ? I don’t know but all of the anger that is seen online is ( in my opinion ) spilling over into real life. The anger that is seen on our tv’s of people in fights when they are out (escalated by alcohol or drugs) is on the increase in a dramatic incline.

People seem to be less tolerant.

Belle Gibson did something extremely wrong. There is no denying that. I hope that someone (rather than exploiting all that anger out there for ratings ) will do something to get her some help with a professional medical person rather than adding to what seems to be a very unbalanced young woman.
How soon people forget what happens when people in the spotlight are continually shamed……
No one knows what is someone else’s tipping point……….

I think its time to put away the tar and feathers…. 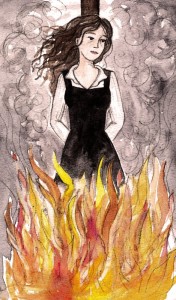 4 replies to Belle Gibson and Tara Brown – That Interview