Lets talk about Milk…..I have that Wham song in my head now except they didn’t sing about milk 😉 anyway… back to the Milk…
Do you have a Nespresso Machine ? with an Aerochino frother ?

I have always bought Brownes Full Cream Milk..Some weeks back during my weekly shop the Brownes milk had a use by date that was in the next couple of days so I decided to purchase the Coles Brand Milk… Plenty of other people seemed to be purchasing it each time I would do my shop there was always someone grabbing a carton or more..

My Aerochino machine started doing weird things – the bubbles were like a bubble bath and no longer “airy froth”  I spoke to Nespresso who sent me a new one and what do you know it did the same thing. I thought I must be getting the faulty ones ! I
I had a theory but thought it was a bit “out there” so I thought I’d test it ..
I had been using the Coles milk for a few weeks by this stage and having this issue each time . So despite my “out there theory” I bought some Brownes milk again and used the Aerochino
Yep you guessed it NO “bath bubbles” Back to  my favorite”airy froth”
I tested the Coles milk again and yep it went back to the large bubbles again

I thought there is hundreds of milk types (probably thousands) around the world and surely someone has come across this before ! I was surprised it isn’t in their FAQ section “why am I getting huge bubbles and not froth”

The other issue was because it wasn’t being “aerated” it was making the milk super hot which after some time I would imagine would damage the inside surface .

Upon comparing the two milk containers there was a difference in the nutritional values between the two milks (who’d have thought !!)

The Protein was different , heavier in the Coles Brand Milk, The sodium was slightly more in the Brownes as was the Saturated fat.

However I do think it was the Protein component that made it “heavier”  and the “air” wasn’t able to circulate as freely thus making a lousy froth.

Some baristas would have you believe that cheaper milks – like the supermarket brand products – will give you a poorer quality coffee as the milk doesn’t froth as well. They say the lower fat content of supermarket brand milks is responsible. But our analysis says otherwise.
To confirm our findings, we asked our resident coffee expert and coffee machine tester for his opinion. He said there is some variability in milk according to season, but regardless of whether it’s homebrand or premium you should be able to get a good foam – so rest assured, your morning cappuccino is safe. He steamed the supermarket brand variety for us and we couldn’t tell the difference.”

I am happy to report that the new milk that recently hit the shelves in WA – Farmers First is an excellent milk, it tastes great and froths perfectly !  Best of all the farmers are benefiting from it .

If I had a property I would have my own Cow and my own milk like I did as a kid ! For now I’ll just support the local farmers 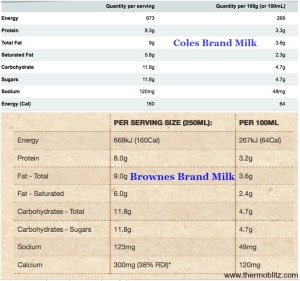 * Featured image of milk in glass and bottle sourced on google.